An Interview with Joshua M. Greene

Q: Amazon.com lists more than a thousand books on the Beatles. Why another one?

A: Because none of those books explores a critical element of the Beatles legacy, namely George Harrison’s spiritual quest. George interpreted being one of history’s most successful entertainers as an opportunity to convey ideas that have encouraged huge numbers of people to go deeper into their own inner lives. Before now, no one has explained what those ideas were or why they meant so much to him.

Q: Did George’s spiritual interests have an effect on the other Beatles?

A: They did go with him to Rishikesh, India, in 1968, and I’ve heard that Paul has been meditating for more than 20 years now. George once said he thought Ringo might be a yogi disguised as a drummer. John took meditation quite seriously at first but then went in his own more existential direction. George’s most notable spiritual influence was on their music, starting with a sitar on the mix of Norwegian Wood and then original songs that spoke to his fascination with the soul and God.

Q: How would you describe George Harrison’s spiritual message?

A: George never fashioned himself a guru. So the message he put out came from recognized teachers and texts that he admired, such as the scripture Bhagavad-gita. “We are not the body but eternal souls. We’ll never be happy in the material world. There is an eternal world where souls come from. You can go there by chanting God’s names.” George wasn’t an academic and kept his message pretty simple.

Q: How did a Beatle end up becoming a yogi? 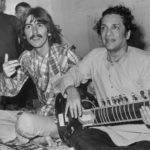 A: It’s hard to imagine what it was like for him, becoming rich and famous beyond calculating by age 23, and having so many profound experiences at such a young age. His life was compressed. He owned everything worth owning, met everyone worth meeting, but he also had the innate intelligence to know that “there’s something more to life than boogying,” as he put it. He said his great fortune was learning what “something more” was, first through the spiritual music of Ravi Shankar, and then through the teachings of India’s yogis and gurus.

A: Here Comes the Sun is an enjoyable, straight-ahead biography that goes from George’s childhood to his death from cancer at age 58. But it does emphasize his discovery of yoga and meditation and the challenges he confronted on the path to God. There are many verbatim discussions and first-hand accounts, so readers get to know George personally and find out what the journey was like for him and how he confronted the hurdles that stood between him and enlightenment.

Q: Have your impressions of George changed? 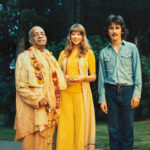 A: I wasn’t aware of how difficult it was to live his life, constantly targeted by exploiters, constantly deprived of his privacy—which was a moral issue that had to be confronted before writing this book. He had marvelous parents and he took guidance from the best teachers he could find, and those supports helped him eventually shed a lot of anger and bitterness. By the end of his life, he had achieved a very heightened, pure state of consciousness.

Q: What is the most surprising thing you learned about him doing this book?

A: The depth of his devotion to God. That took my breath away. Everything George Harrison did he did seriously, whether it was learning how to play guitar or how to plant a garden, but his devotion to God was stunning. Daily prayer, meditation, love songs, devotional works. For someone with his background in entertainment, it certainly was unprecedented.

Q: Your background is in Holocaust studies. What brought you to do this book?

A: It was terribly depressing looking at the dark side of human nature for so long. I had to move toward the light and couldn’t think of a better subject for doing that than George. Of course, it’s vitally important to study the Holocaust, to try—as hard as it may be—to understand how people could fall so far from civilized human behavior. But it’s just as important, I believe, to see how high we can ascend when we put our minds to it. The title of the book, which comes from one of George’s most popular songs, “Here Comes the Sun,” says it all.

Q: What were the most difficult parts of writing about George’s spiritual journey?

A: Remaining objective, finding credible details amid tons of spurious accounts, striking a balance between admiration and unbiased writing—and perhaps above all to keep focused on the spiritual message without becoming preachy. I think George would have wanted that.